You are here: Home › Uncategorized › Daring to Struggle, @ UQAM 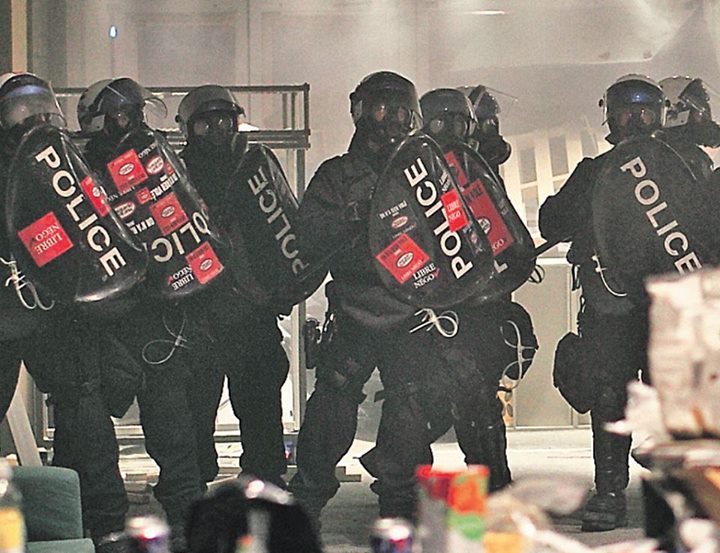 RESPECT to the strike defenders at UQAM and their allies. It was a full-day battle today (April 8), from early morning till late night. I only observed first-hand the crescendo tonite, after the intervention of what was clearly over 100+ riot police, backed up by bike cops, at the Da Sève Building occupation. The resilience of UQAM resisters is inspiring.

For a sense of what happened earlier today at UQAM, and the solidarity and support shown by students when the cops got called in, check out this video:

There were 21 arrests (some reports of 22) with at least 11 women-identified protesters among the group. There would have undoubtedly been more arrests if not for the fight-back by students. People arrested are facing criminal charges (mischief, illegal assembly). Many of those arrested weren’t released until just a few hours ago.

A student strike is messy, especially with a repressive administration, scab-enabling mainstream media, and certain moderate sectors of the movement that has second-guessed a strike that “this time” is too radical in scope and not firmly controllable. Student strikes are at their heart the grassroots students and their support networks actually enforcing and defending the strike (a much fewer number of dedicated activists, disproportionately the so-called masked radicals, and definitely not mainstream-media friendly).

Because of the police intervention in the afternoon, and the arrests of dear comrades, students and supporters had a spontaneous assembly in the Da Sève Building (near Ste-Catherine & St-Denis) that turned into an open-ended occupation.

I got there after 9:30pm tonite, and the atmosphere at the occupation was festive and rambunctious. Music, dancing, food, conversation, and a lot of debriefing of what’s been happening in the past few days and week, particularly the heavy-handed approach of UQAM administration. There were several hundred people present.

I didn’t see anything directly myself, but I eventually saw the aftermath of the systematic removal of UQAM’s pervasive surveillance cameras. Kudos to whoever was involved with that! Amazing work.

Eventually, it was obvious that the police would intervene, after getting a request from the UQAM administration. The SPVM (Montreal police) even tweeted about it:

It was also clear what the police had in mind via their communications on police radio (which I only heard about second and third-hand: it was journalists who were listening to the scanner most intently). The cops were claiming: “we want arrests, not a dispersion” and they made sure to talk about the ambulances that were on-call to deal with anticipated injuries.

I was part of the outside support group, while inside the building was fully barricaded. All available furniture and material – chairs, desks, couches, shelves, recycling boxes, garbage bins – became barricades to keep the cops out. A huge oversize banner – with the expression: Oser lutter, c’est oser vaincre [Daring to struggle is to dare to win] – was used to cover the metro level approach to the main occupation area. Here’s a photo of the banner from a demo: 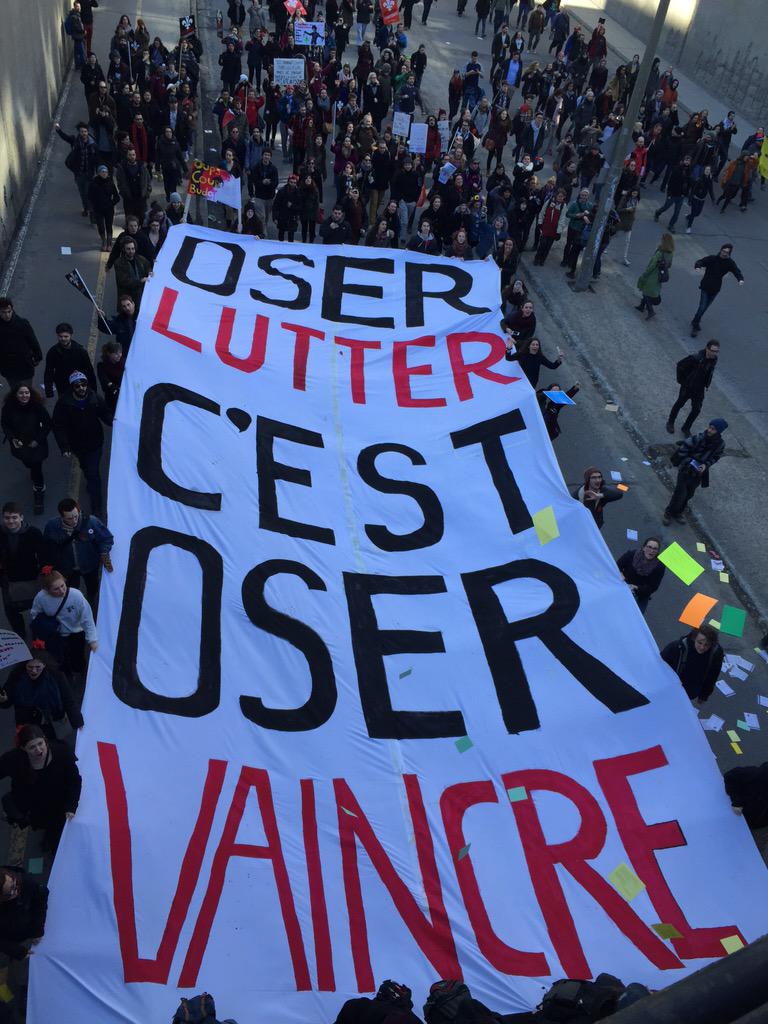 Around 12am, the occupation divided into the people barricading inside, and the outside supporters (I was in the latter group). I personally observed at least 100 police officers mobilized to take over the street and break into the occupation. Here’s a video of the cops breaking the doors to get in: www.facebook.com/video.php?v=10152634831047583

Meanwhile, outside, the group I was part of (on Ste-Catherine, moving east) was attacked with tear gas and pepper spray, while being pushed back by bike cops and riot cops in succession.

Eventually, I headed back to the QPIRG Concordia mothership, but not before trying to get reports of possible arrests inside. The early reports are of upwards of five or more arrests, which are minimal compared to the numbers who were actually barricaded inside. But, it’s a big building, with lots of spaces to avoid cops, and lots of ways to get out (so, a big fuck you to the SPVM and UQAM administration).

Solidarity with all who kept up the fight inside Da Sève, and of course with everyone who was arrested and now facing criminal charges, and their support people.

[If you’re facing criminal charges and want some support, don’t hesitate to get in touch with Contempt of Court: A Legal Clinic by and for Social Movements / Outrage au tribunal: clinique juridique par et pour les militantes et militants: www.outrageautribunal.net]

Already, there are multiple responses planned today (Thursday, April 9), with at least three demos, starting at 8:45am (rendez-vous: J-M770), another in the afternoon, and yet another night demo slated for 8pm (rendez-vous: Place Émlilie-Gamelin / métro Berri-UQAM).

With the unabashed entry of police, including armed riot police, into the heart of a university campus seen as a linchpin of the social strike against austerity, the ever-evolving Spring 2015 has decisively escalated.

– Jaggi Singh, member of No One Is Illegal-Montreal.
twitter: @JaggiMontreal 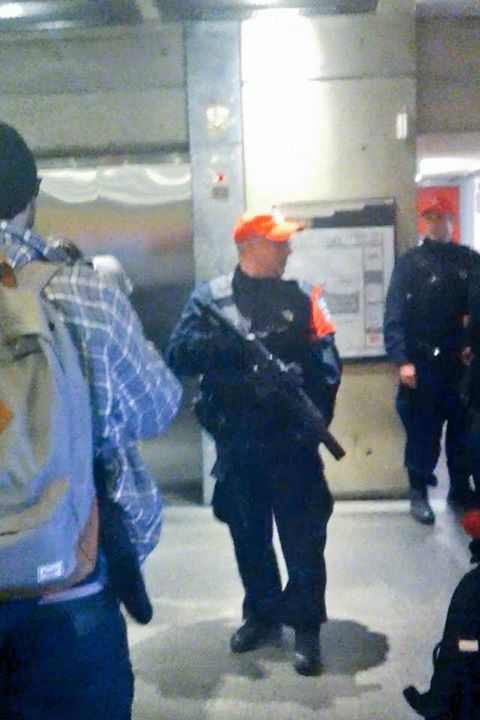 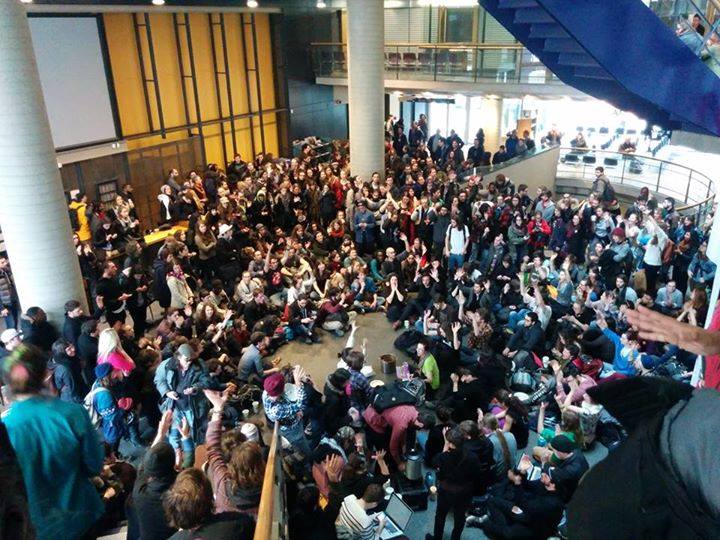