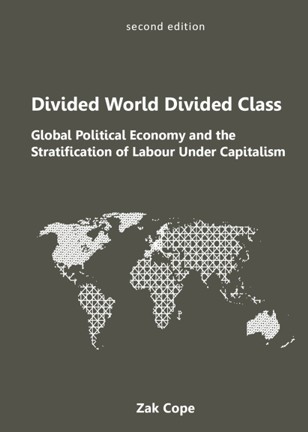 Divided World Divided Class charts the history of the ‘labour aristocracy’ in the capitalist world system, from its roots in colonialism to its birth and eventual maturation into a full-fledged middle class in the age of imperialism. It argues that pervasive national, racial and cultural chauvinism in the core capitalist countries is not primarily attributable to ‘false class consciousness’, ideological indoctrination or ignorance as much left and liberal thinking assumes. Rather, these and related forms of bigotry are concentrated expressions of the major social strata of the core capitalist nations’ shared economic interest in the exploitation and repression of dependent nations.

The book demonstrates not only how redistribution of income derived from super-exploitation has allowed for the amelioration of class conflict in the wealthy capitalist countries, it also shows that the exorbitant ‘super-wage’ paid to workers there has meant the disappearance of a domestic vehicle for socialism, an exploited working class. Rather, in its place is a deeply conservative metropolitan workforce committed to maintaining, and even extending, its privileged position through imperialism. The book is intended as a major contribution to debates on the international class structure and socialist strategy for the twenty-first century.

This second edition includes new material such as data on growing inequality between the richest and poorest countries; data illustrating rising real wages in Imperial Britain; explication of the concepts of value, monopoly capital and unequal exchange and their ramifications for the global class structure; discussion of social imperialism on the left; responses to critiques surrounding the thesis of mass embourgeoisement through imperialism; as well as further information on a range of subjects.

“Dr. Cope presents a thought provoking study of the political economy of the world system by focusing on the concept of a global labour aristocracy. Within the world system, which has also been described as a global apartheid system by some, enormous differences exist between workers’ wages and living conditions, depending on where the workers are located. The author details how a global labour aristocracy in core countries benefits at the expense of workers in periphery countries. The mechanisms supporting such a situation are identified as exploitation, imperialism and racism. The book is a valuable contribution to globalization critique.” — Gernot Köhler, Professor (retired) of Computer Studies at the Department of Computing and Information Management, Sheridan College, Ontario, Canada and author of The Global Wage System: A Study of International Wage Differencesand Global Economics: An Introductory Course

“How can we link the division between the poor and the rich people in one and any country and the division between the rich and poor nations together into an analytical framework? The answer lies in the concept of ‘the embourgeoisement of the working people’ of the rich core countries and the fact that colonialism and national chauvinism have gone hand in hand so as to breed a ‘labour aristocracy’. This book is a must-read for anyone who cares about fairness. Zak Cope brings together brilliantly the concepts of nation, race and class analytically under the umbrella of capitalism, by situating racism in the class structure and by locating class in the context of the global economy.” — Mobo Gao, Chair of Chinese Studies and Director of the Confucius Institute at the Centre for Asian Studies, University of Adelaide, and author of The Battle for China’s Past: Mao and the Cultural Revolution

“This is a surprising book. At a time when confusion about Globalization surrounds us, Zak Cope pulls us towards what is fundamental. He outlines the 19th & 20th century recasting of the diverse human world into rigid forms of oppressed colonized societies and oppressor colonizing societies. A world divide still heavily determining our lives. Working rigorously in a marxist-leninist vein, the author focuses on how imperialism led to a giant metropolis where even the main working class itself is heavily socially bribed and loyal to capitalist oppression. Much is laid aside in his analysis, in order to concentrate on only what he considers the most basic structure of all in world capitalist society. This is writing both controversial and foundational at one and the same time.” — J. Sakai, author of Settlers: Mythology of the White Proletariat

“Divided World Divided Class is valuable to a wide audience, especially those unfamiliar with the history of imperialism, the unequal exchange paradigm, and its impact on class structure. It should be a wake-up call to advocates for the exploited classes of the global South as they attempt to develop a twenty-first-century praxis, and as they engage with advocates for workers in the global North—without denying activists in the global North a role in helping to change the world in favor of the exploited peoples of the world. It reaffirms, with an impressive breadth and depth of evidence and argument, that the Northern workers must help fight for democratic sovereignty in the global South—even if it appears to be against their material interests to do so.” — Professor Timothy Kerswell, University of Macau, Department of Government and Public Administration