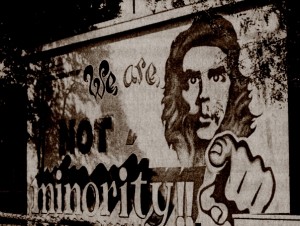 As US politics lurches rapidly to the right, worried residents wonder about getting out. Friends talk among themselves about moving to Canada, Europe, Mexico–anywhere to escape Trumpland. Taking a different angle, some activists propose separating the “blue states” from the “red states,” essentially redrawing the map of North America. One plan calls for the West Coast to secede. Others lobby for California to become an independent country. So far, most radicals don’t seem too serious about these exit strategies. But they do have a serious aspect. For one thing, if things keep getting worse, some of us might be forced to flee. What’s optional now could become a necessity.

But whether that happens or not, US borders are going to be the focus of intense political struggle in the coming period. We already see it happening. The borders are brute physical expressions of the authority of the empire and its state. So naturally they are zones of contention, especially in times of social stress. Principled radicals in North America have always challenged the US’s arrogant territorial claims and its corrupt settler nationalism. Right now, as the lives of hundreds of thousands of migrants and refugees are thrown into turmoil by the Trump regime, we’re forcefully reminded that this challenge is no abstraction. It’s a concrete practical obligation.

So it makes sense for us to think creatively (and disloyally) about the borders of the empire we live in. With or without Trump, we should never adopt the oppressors’ borders as our unchangeable destiny. But we need to generate better solutions than hunkering down with Democrats in “blue” California, or searching for a friendlier, more progressive home overseas. Our strategy must be be more radical than that.

The US isn’t a legitimate nation. It was formed by war criminals and human traffickers who raped and pillaged their way across the continent. It became rich through genocidal land grabs, slavery, white supremacy and colonialism. The US’s imposed imperial borders and its colonial claims are butressed by white capitalists’ economic dominance and the overwhelming power of their military. But those circumstances won’t last forever.

Every empire falls eventually. And today the US is a declining superpower, wobbling on the edge of economic and social collapse. Its industrial base is hollowed out; its infrastructure and educational systems are crumbling. Imperial rivals are snapping at its heels. Its environment and food supply are compromised. Its corrupt health care “system” is in chaos. Its rulers, in their insatiable hunger for  obscene profits, have become addicted to elaborate financial swindles that are more and more vulnerable to global economic shocks. The current US regime’s greedy, blundering imperial foreign policy threatens to ignite major wars, which probably won’t turn out well for them.

The New Deal “social contract” between US capitalists and their white population is being phased out. Capitalists don’t want to pay for it any more. They’re rolling the dice on a meaner and cheaper version of the “American Dream” for the white masses, even though that has already caused greater social instability. They’re counting on naked racism to maintain white loyalty, and on naked force to contain the emerging non-white majority. But reactionary populism, repression and race conflict have volatile side effects; they lead to unexpected consequences.

When empires fall, they can fall fast and fall hard. It wasn’t that long ago that the Soviet Union was a major superpower, rivaling the US in military power and geostrategic influence. Starting in 1985, during a period of economic stagnation and military overextension, Chairman Mikhail Gorbachev and his crew decided to shake things up with a new set of economic, political and foreign policies that they thought would “make the USSR great again.” But as it turned out, they had underestimated the underlying weakness of the USSR’s economy, and overestimated its social cohesion. Over the course of just six years, the Soviet Union collapsed. Not only was the Soviet Union officially dissolved into more than a dozen sovereign countries, but some of those countries sub-divided further into separate nations along old historical lines. For instance, Yugoslavia broke down initially into Serbia, Croatia and Montenegro; after further secessions there are now seven independent states within its former borders. Czechoslovakia divided into Slovakia and the Czech Republic. On the other hand, East Germany reunited with West Germany. Some former Soviet countries are still allies of the Russian Federation, while others joined NATO. What had seemed like an established order with fixed borders changed almost overnight.

There are lots of differences between the USSR and the US, of course. But this empire will also fall some day, unable to survive its own centrifugal forces and its own geopolitical overextension. As with the Soviet Union, that fall may happen sooner that we expect. Today’s volatile political and economic turmoil could easily spiral into depression, world war, total fascism or civil war. Fragmentation and division could spike suddenly and gain momentum quickly, like they did in the USSR.

Will the collapse of the US as a political entity be good or bad? Well, clearly it could have a variety of outcomes, depending on how it happens, and the strength of all the active social forces. But a disintegrating US certainly offers opportunities for oppressed people and for revolutionaries—if we’re prepared.

One thing’s for sure: for activists serious about fighting oppression, the US isn’t “our” country. We don’t pledge allegiance to it. We don’t consider it “one nation under God” or “indivisible.” We don’t celebrate the Euro-settler conquest of North America. The US is a prison-house of nations, held together by white supremacy and imperialism. If it falls apart, that’s no reason to mourn. In fact, we shouldn’t wait to see if the US disintegrates on its own. We should be strategizing right now about breaking it up. We should be trying to make it happen, on our terms.

What will the dismemberment of the US look like? There are lots of theoretical possibilities, with different timelines. But more than likely, a breakup will happen along the deep national fault lines that already exist.

There’s no unanimous formula for revolutionizing the borders of the US. A territorial breakout by one oppressed nationality could set off land struggles by other nationalities. Or a chaotic disruption of the social order might lead to the rise of insurgencies for self-defense and independent community-building. One thing we do know is that the necessary negotiations and decisions about redrawing the map of a dying settler state belong in the hands of oppressed nations and peoples, not the white settler population. The Provisional Government of the Republic of New Afrika provides one illustration of how conflicting and overlapping land claims might be resolved:

In the meantime, all radicals, including white radicals, should be struggling to secede–both mentally and physically–from the US. Because practically speaking, it’s not just the US ruling elite that we have to overthrow; it’s the settler nation itself.

As activists of conscience, we should reject political schemes that promise to keep the US intact, while somehow turning it into a “progressive” country. These “left” patriotic scenarios aren’t realistic or honest. They’re based on the pretext that the world’s deadliest imperialist settler state can turn into its opposite; that the bulk of the white settler population will surrender its beloved race privileges, its imperial benefits, and its domination of land and resources in order to lift up the oppressed and return what was stolen. There’s no support to be found anywhere in US history for this fantasy.

Instead, we need an entirely different alignment: the oppressed peoples of the US empire fighting for self-determination, plus a rebellious white minority acting in solidarity, committed to tearing down colonialism and white supremacy. It’s within that alignment that we all can contribute to the empire’s revolutionary demolition and find a path to freedom.

Internationalism has always been close to the heart of radical politics. In the long run, we strive to break down arbitrary and unnecessary barriers that divide peoples from each other. Some of us envision a time when nations and borders as we know them are unnecessary. But internationalism doesn’t mean we sweep the US empire’s constant drive to conquer, liquidate or subordinate oppressed nations and nationalities under the rug. For radicals, internationalism is based first of all on the establishment of justice among nations. It’s a voluntary unity of equals–something which can only become a reality if all parties are exercising self-determination.

This is something white radicals in particular must grasp as a matter of principle. Otherwise, we find ourselves utterly compromised: promoting supposedly progressive politics without fundamentally and fully repudiating the ruling class’s own “internationalist” program of genocide, colonialism, forced assimilation and white domination. That’s how some white leftists end up, through twisted and opportunist logic, blaming oppressed peoples for “divisiveness.”

Native and national liberation movements face many challenges as they confront modern imperialism. In some cases they’ve been weakened by neo-colonialism and internal divisions, and struggle to regroup and rebuild. Still, given their deep-rooted tenacity, and their strategic position astride the main contradictions in imperial society, these movements are currently the main forces capable of leading an anti-imperialist breakdown of the US.

That breakdown can also be significantly advanced by creating and defending enclaves where people of color, women, gender non-conformists and radicals struggle to create diverse forms of independence and autonomy.

Unfortunately, on a practical level, the radical Right is ahead of us here. Many die-hard fundamentalists and neo-fascists have already started building enclaves of their own. They’ve grasped a harsh reality: that in a chaotic, deteriorating, violent society, a group’s chances of survival increase according to their social unity, self-sufficiency, control of territory, and capability for self-defense.

With or without our intervention, the US will disintegrate eventually. If it happens without us planning it, or even expecting it, we could be disoriented and caught in the crossfire. It’s far better to be prepared and proactive. In coming years, as the empire weakens, many strategies for revolutionary change will be proposed, discussed, and attempted. The breakup of the US must be central to those strategies.

Sakai, Settlers: The Mythology of the White Proletariat

Victor Sebestyen,  Revolution 1989: The Fall of the Soviet Empire

Ward Churchill, I Am Indigenist

Roxanne Dunbar-Ortiz, An Indigenous Peoples’ History of the US

Sanyika Shakur, “Who Are You?”

Kersplebedeb, “Black Genocide and the Alt-Right”

Nelson Denis, War Against All Puerto Ricans: Revolution and Terror in America’s Colony

Natasha Lycia Ora Bannan, “The United States Makes the Case for Why Puerto Rico is Still its Colony”

Sakai, Learning From an Unimportant Minority: Race Politics Beyond the White/Black Paradigm