You are here: Home › post › Entanglement: On Anarchism & Individualism 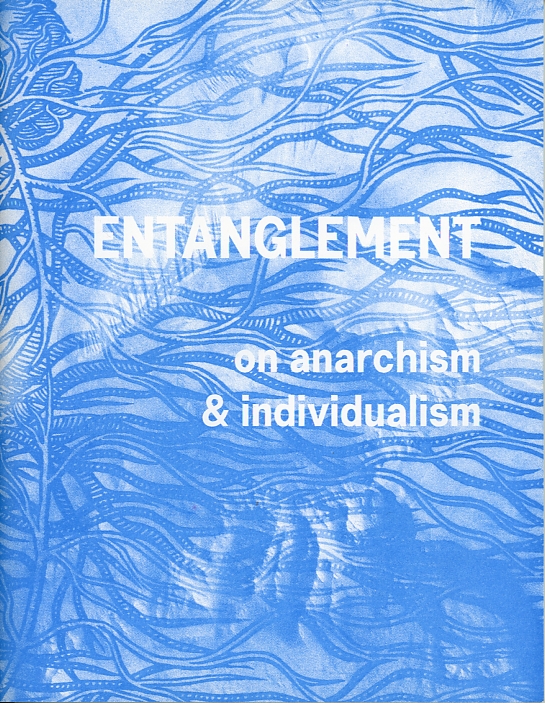 Both aesthetically and politically, a beautiful political intervention exploring the philosophical and political underpinnings and implications of individualist trends in contemporary and historical anarchist theory.

Entanglement is a collection of five pieces that critically engage with individualist politics in anarchism and anarchist communities. They are:

As the authors explain in their collective introduction:

“Initially, one person asked some friends to come together and co-create a collection of texts against individualism. Whether the project is actually against individualism is still up for debate. We’ve done a lot of playing with language and some of us prefer “on individualism,” “for collectivism,” “on interdependence,” or “critically engaging with individualism.” In reality, it is all of those things and also other things too—defences of duty and futurity, critiques of some of old philosophers, calls to reconsider oppression and social position, some explorations of the interdependence of all forms of life, and thoughts on our wider interstellar context. We think individualism and its place in anarchist thought is still a common thread that runs through all of these texts, but the project certainly isn’t the single-minded refutation that “against individualism” might imply.

“We have been having the conversations that lead to the pieces in this collection, in various forms and configurations, for a long time. We talked about our changing relationships to insurrectionary anarchism. We talked about how certain critiques of activism or of anarchist organizations, critiques that in most cases we shared to some extent, seem to have been taken on as principles in themselves. We talked about desire, about informality, about strategy, and about revolution. We talked about negativity, whether we’re actually against everything (we’re not), and whether we still want to orient ourselves towards the future (we do). We talked about whether anarchism can be about trying to change things (it has to be). We hope the writings in this project will help us to keep having these conversations with a wider circle of people.

“This project was born of a desire for clarity and for rigorous political conversation. We share a desire to sharpen our analyses, and to communicate our positions clearly to the people around us so that we can know where affinities lie. We are not all the same as each other, something that’s become even clearer through the process of writing together about our politics, but we do share a number of commitments and orientations, and that’s good to know. Talking about it will help us understand who we can count on for what, and who we should look to when we have ideas about how to move forward. It will also help us understand the size and nature of the revolutionary force we are building.

“The writing here is the product of a lot of debate, compromise, and editing but it is not the product of co-authorship. “Dealbreaker” ideas have for the most part been rephrased or removed, but there is still a lot of difference contained in this volume, and we are ok with that. We each agree to stand by the volume as a whole but we are not each equally committed to all of the writing it contains. Each essay represents an individual’s analysis, sharpened and improved by input, suggestion, agreement and disagreement with four other people as well as some generous outside readers.

“Who are we? We are a group of five white anarchists who have known each other for years. We are relatively young and have been anarchists for an average of ten years. We have all spent some time in and have some connection to Montreal (occupied T ioht ià:ke), although we don’t all live there now. This group is temporary. It is not a collective that existed before or will continue to exist as a project in the future, but we are all friends and recognize that this project is to a large extent the product of social ties and of shared experience in and out of the anarchist milieu. Every single one of us has seriously considered quitting this project at some point during the process because writing is hard, because affinity is never perfect, because critique can hurt, and because time is scarce and action often comes first. But we didn’t, and here it is.”

Entanglement is also available online (for free) as a PDF at https://www.entanglement.cc