You are here: Home › books › Eurocentrism and the Communist Movement 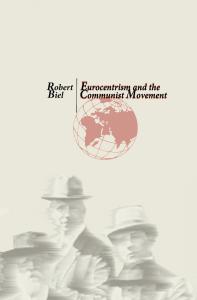 Robert Biel’s Eurocentrism and the Communist Movement traces the history of Eurocentric — and anti-Eurocentric — currents in the Marxist-Leninist tradition, arguing that this distortion was key to the development and spread of revisionism, and ultimately to the failures of the communist project, in the 20th century.

A work of intellectual history, Eurocentrism and the Communist Movement explores the relationship between Eurocentrism, alienation, and racism, while tracing the different ideas about imperialism, colonialism, “progress”, and non-European peoples as they were grappled with by revolutionaries in both the colonized and colonizing nations. Teasing out racist errors and anti-racist insights within this history, Biel reveals a century-long struggle to assert the centrality of the most exploited within the struggle against capitalism.

The roles of key figures in the Marxist-Leninist canon — Marx, Engels, Lenin, Stalin, Mao — within this struggle are explored, as are those of others whose work may be less familiar to some readers, such as Sultan Galiev, Lamine Senghor, Lin Biao, R.P. Dutt, Samir Amin, and others.

Eurocentrism and the Communist Movement was written in the context of the declining British Maoist movement of the late 1980s. As Robert Biel explains in his preface to this new edition,

“The work responded to a strong sense that the important task was to construct a Marxist theory of political economy which could reflect the real relationships in the contemporary world system. That was the constructive task but, before we could attempt it, we also had to conduct a negative task — one of demolition: to identify and remove the blockage that stood in our way. This blockage was the thing we identified as Eurocentrism, a trend which imprisoned theory in an economistic and mechanical framework, denying the real dynamics of history in which the world outside the major European powers has always played such a major role, and does so still in the form of the liberation movements against all forms of oppression and neo-colonialism.

“On the basis of the research conducted in the current book, I felt I was in a position to begin the constructive task, reflected in my book The New Imperialism (2000). In this book, I sought to show that the superficial consolidation of world capitalism (then still in a somewhat triumphalist phase) was premised on an intensification of capitalism’s fundamental contradictions — on the destruction of human resources and the physical environment—and that the different forms of alienation highlighted by Marx are still fully present, and more specifically, that the global order remains profoundly racist. In my most recent book, The Entropy of Capitalism (2012), I have described a system now beginning to unravel under the force of these contradictions. In this sense, Eurocentrism and the Communist Movement forms the beginning of a trilogy, the more destructive and explicitly polemical part, aiming to clear the terrain.”

In pursuit of this “destructive”, anti-racist and anti-colonial goal, Biel has made an important contribution to understanding the development of Marxist thought in the 19th and 20th centuries, with strategic implications for our current revolutionary project:

“Declining capitalism seems locked in a death-embrace with the symptoms of its own decay. While going to its own grave, it is determined to drag humanity down with it. To reverse this tendency is the task now facing the left. … Where the system marginalises the periphery, the excluded, we must place them in the centre of the picture. … It is not certain that the radical forces will be able to seize this chance and rescue humanity. But, if armed with a historical understanding which identifies the most intensely oppressed and the most creative forces, it will indeed be equipped to rise to the challenge.”

“Robert Biel’s Eurocentrism and the Communist Movement is a conscientious and well-researched effort to present Eurocentrism as a colonial, racist and social-chauvinist mentality and phenomenon. It decries this problem as having overvalued European developments and influence under the rubric of ‘progress’, depreciated the history and dynamic of the oppressed peoples and nations, subordinated their revolutionary role and aspirations to the European states and industrial proletariat and in effect favoured colonialism and the slave trade and the entire train of consequences up to neocolonialism and neoliberalism.” — Professor José María Sison, chairperson of the International Coordinating Committee, International League of Peoples’ Struggle

“Biel challenges not only Eurocentrism but the corresponding economic determinism that has frequently limited the scope and reach of radical Left social movements. I found myself thinking about the famous phrase, attributed to Italian Marxist Antonio Gramsci, to the effect that ‘…the truth is always revolutionary.’ To which I would add, no matter how challenging it may be to address it.” — Bill Fletcher, Jr., co-author of Solidarity Divided; syndicated columnist

“A long overdue second appearance as it was singularly the most outstanding contribution in the checkered history of the anti-revisionist movement in Britain … an exciting, fertile exploration to developing the need to make concrete and relevant the general theses adopted in the 1960s.” — Sam Richards, Encyclopedia of Anti-Revisionism Online

Robert Biel teaches political ecology at University College London and is the author of The New Imperialism and The Entropy of Capitalism. He researches systems theory and conducts a wide-ranging practical programme on urban agriculture.

One Response to "Eurocentrism and the Communist Movement"