You are here: Home › post › Free Inside: The Life and Work of Peter Collins 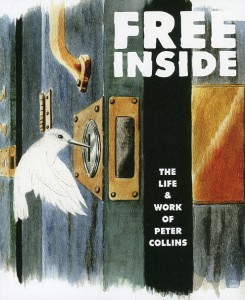 A combination of comics, political cartoons, illustrations, paintings, and essays on the Canadian prison system, ‘Free Inside: The Life and Work of Peter Collins’ is 184 full-colour pages of work from prisoner and activist Peter Collins, and those who knew him best.

from the back of the book:

Peter Collins was a Canadian artist and activist who spent 32 years in prison. At 22, he was sentenced to life for killing a police officer during a botched bank robbery.

In spite of the many obstacles to recovery that Collins faced within the prison system, he came to understand the harm that he had caused and worked to do good with what remained of his life. He spent the decades that followed working to improve himself as well as the conditions of his fellow prisoners. He advocated for those living with HIV/AIDS and Hepatitis C in prisons, criminalized women, indigenous people, the young and the ill, as well as animals living on both sides of an institution’s walls. Denied compassionate leave to spend the end of his life with friends and family, Peter died in prison at the age of 53.

Among his cartoons, paintings and essays are healtfelt additions from friends, comrades, and those who knew him best. ‘Free Inside’ is a condemnation of the Canadian prison system and an invaluable perspective on notions of justice, “rehabilitation”, political activism, and hope. It is an imperfect record of the life and work of a courageous, compassionate man who deserved better from the world.”

Published by As Astra and available from leftwingbooks.net