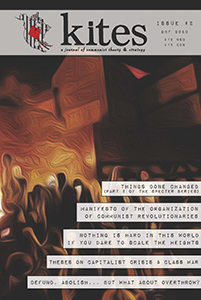 The second issue (Oct. 2020) of this communist journal is now available from leftwingbooks.net — the following is taken from its opening editorial [“Nothing is hard if we dare to scale the heights”]:

Revolutionary philosophy, strategy, and politics are difficult to come by in North America today. While the member organizations and individuals behind kites cultivate class struggle and mass combativeness in their own regions, our collective contribution through kites will be to continue to address questions of revolutionary strategy, analyze the unfolding crises of capitalism-imperialism, and offer summations of resistance and revolutionary struggles that we must learn from.

In this issue, we follow this opening editorial, written shortly after the outbreak of rebellions in the wake of the murder of George Floyd by police, with a short intervention from our Editorial Committee into the current movement against police brutality and the oppression of Black people, entitled “Defund, Abolish…but what about Overthrow?” In it, we compare and contrast current calls to “defund” or “abolish” the police with a communist understanding of their role and the need to overthrow the system they enforce.

“Manifesto of the Organization of Communist Revolutionaries (US)” offers a searing indictment of US capitalism-imperialism, an inspiring and materialist vision of a communist future, an examination of the challenges and contradictions of proletarian dictatorship and the socialist transition to communism, and bold initial strategic thinking on how to develop the subjective forces for revolution that would stand a chance of overthrowing US capitalism-imperialism through revolutionary civil war. “Theses on capitalism, crisis and class war” by José San Miguel outlines a concentrated analysis of the existential threats to humanity posed by the capitalist crisis of overaccumulation, the dynamic role of proletarian revolution and socialist states in shaping the outcome of previous crises, and the challenges before the forces of communist revolution today, from resurgent fascism to the bourgeoisie’s flexible permanent regime of preventive counterrevolution. We believe these “Theses” sharply pose many of the most crucial questions and challenges before revolutionaries today. We conclude this issue with “Things Done Changed,” part two of Kenny Lake’s four-part series The Specter That Still Haunts: Locating a Revolutionary Class within Contemporary Capitalism-Imperialism, in which Lake analyzes how the ascendance of finance capital, the development of global cities and export processing zones, and the growth of slums, migration, and resource extraction impact who the proletariat is today and how it can be organized for revolution. We look forward to being in dialogue with others attempting to dig into the challenges of building a revolutionary movement and communist organization as well as connecting revolutionary theory with all those hungry for it in the wake of the rebellions.

Available from leftwingbooks.net; bulk orders of more than 3+ can be more discounted, email [email protected]

Also: you can still order copies of kites #1, also available from leftwingbooks.net