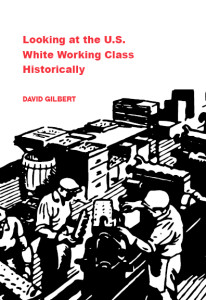 I spent the past weekend writing a German review of the new Kersplebedeb edition of David Gilbert’s Looking at the U.S. White Working Class Historically, originally published in 1984. While the original piece mainly consisted of reviews of three relevant publications – Ted Allen’s pamphlet White Supremacy in the U.S./Slavery and the Origins of Racism, W.E.B. DuBois classic Black Reconstruction in America, and J. Sakai‘s underground favorite Settlers – the new edition contains plenty of extra material, including Gilbert‘s essays „Some Lessons from the Sixties“ (1991) and „After the Sixties: Reaction and Restructuring“ (2017) as well as comments on the original piece by J. Sakai.

The review I wrote was specifically aimed at a German-speaking audience, so there is little point in translating it here. However, I would like to name five aspects that I found particularly intriguing in a book that I recommend wholeheartedly to anyone interested in anti-racist and anti-imperialist class organizing.

1. White Workers and the Revolutionary Project

“There is very little analysis, and even less practice, that is both real about the nature and consciousness of the white working class and yet holds out the prospect of organizing a large number on a revolutionary basis.” This is Gilbert’s point of departure. It is of great importance for radical organizing, perhaps particularly here in Europe where the white working class – largely made responsible for the rise of the far right, similar to the situation in the U.S. – remains a demographic large enough to turn the idea of revolutionary mass organizing without it into a farce. In reference to Redneck Revolt, an organization that has received a fair amount of attention even in Europe, Noel Ignatiev has written the following on this blog:

“American history shows that any political group, left, right or center, that fails to challenge in practice the white community and the institutions and patterns that maintain it will reinforce an identity that has led countless potentially progressive movements to ruin and whose capacity to do harm is by no means exhausted – no matter how vigorously it denounces “racism” and capitalism and how many coalitions it enters with non-whites. Simply put, white people organized as whites are dangerous to the working class and to humanity … and this is true regardless of the intentions of the organizers.”

This might be true, but organizations based on whiteness and organizations with the aim to primarily mobilize and organize among the white working class are not the same thing. The latter are mandatory if we don’t want to simply abandon this part of the population and hand it to the right on a silver platter. This would be disastrous, particularly here in Europe. It is what makes the perspective offered by Gilbert so important: “We white radicals have a particular responsibility and crying need to organize as many white people as possible to break from imperialism and to see that their long term interests, as human beings and for a livable future for their children, lie in allying with the rest of humanity.” And: “We can‘t afford to repeat the old errors of once again floundering on the dilemma of either ‘joining’ the working class’s white supremacy or of abandoning our responsibility to organize a broader movement.”

2. The Meaning of Culture

Gilbert writes about the 1960s:

“The main base for the anti-imperialist movement of the 60s was a social movement of youth, heavily impacted and in many ways generated by Black culture. As the movement developed, it involved increasing numbers of working-class youth, who played a major role in the movement‘s growth and heightened militancy. This extension showed … the ability of culture to be a bridge to deepening the class base of a social movement.” (p. 44)

There are two particular lessons to be drawn from this:

One, it shows that even if the juxtaposition of class and culture is a reality causing much havoc in the left today, it is based on wrong assumptions. There is no contradiction, unless we create it.

Two, it reveals the shortcomings of an essentialist understanding of cultural appropriation that does not make the critical distinction between random, offensive, and commercial use of cultural expressions on the one hand, and considerate, respectful, and curious cultural interaction on the other. The latter does not exploitculture but create culture, which is per se progressive. To deny this means to rob ourselves of one of the most promising ways to transgress the structural divisions between communities that the system imposes on us.

Gilbert writes that it is “an urgent priority … to look for the places where movements for justice can best organize white people for their long term interests on an anti-imperialist, anti-racist, anti-sexist basis.” This echoes the discussions about a new class politics that presently occupy large parts of the German-speaking left. Together with Sebastian Friedrich, I have written about this in an article for Counterpunch, which was mirrored on this blog.

4. Quality of Life vs. Standard of Living

In his essay “After the Sixties,” Gilbert makes a distinction that we rarely encounter in anti-imperialist and anti-capitalist organizing: “The Left shouldn‘t try to outdo imperialism in promising workers at home a ‘higher standard of living.’ Instead, we have to show how we can work toward a better quality of life, especially for our children.” This is crucial shall people be reached with an honest and sustainable message. If we only measure a good life by people’s access to material goods, there is an objective reason for the white working classes to defend the imperialist status quo. In order for them to embrace a revolutionary project, they must also embrace different values.

Finally, J. Sakai hits an enlightening note in his 1992 comments on Gilbert’s piece. He writes:

“To me, the main point is that in seeing Classes as they really are, in their historical materialist development and in their daily lives, we learn that truly change-oriented classes are new classes. Young, being born in the contradictions of social structures. Young classes that are self-consciously creating themselves as much as they are being created by anonymous social-economic forces. The young euro-bourgeoisie was once such a class: bold, adventurous, reshaping the world through a revolution in the arts and sciences as much as the cannon. … Revolutionary change requires us to discover a new communal class culture, a different daily life.“ (p. 90-92)

New classes for a new class politics. A winner.

Now, please go out and get this book.