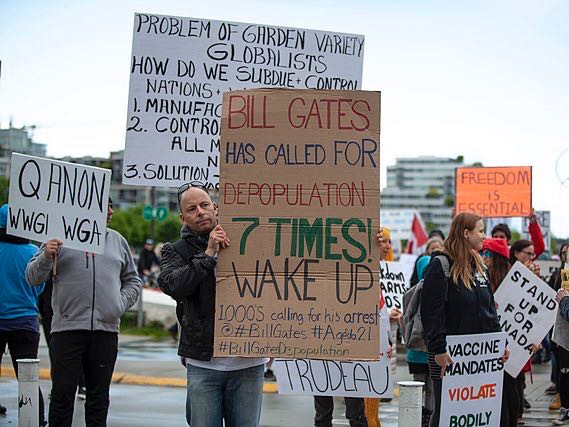 This article is re-posted from Three Way Fight.

Antifa had quite a summer: First, jetting around the country, stoking unrest and attacking police in dozens of cities simultaneously; then, moving by tour bus through the countryside to burn and loot small towns, only to be turned back by the armed and vigilant townsfolk; and finally, resorting to a scorched earth policy, setting forests ablaze and burning more than four million acres across three states.

None of those stories are true, but taken together they represent the history of the year 2020 as it is understood among a certain stratum of right-wing media. Probably these conspiracists would also blame Antifa for the coronavirus if only it weren’t a Chinese bioweapon and/or a Democrat hoax.

That there are people who believe such things it is impossible to deny. But it is equally impossible to accept. Such views are not merely mistaken. Even the word “lie” does not do them justice. With startling frequency, these accounts cross over from the untrue to the untenable, and yet they persist. What they are is an elaborate fiction, a kind of fantasy interpretation superimposed on reality, but not governed by the same rules as reality.

I sometimes wonder about the authors of such stories. Portland, the city where I live, had endured a hundred nights of protests—sometimes riots—against police brutality and racism. Hundreds and sometimes thousands of people showed up ready to fight with cops, night after night, facing tear gas, pepper spray, rubber bullets, and old-fashioned beatings. Even more remarkable is the fact that the crowds were largely composed of an entirely new crop of pissed-off people learning street-fighting by trial and error, with little real connection to any established organization or existing movement.

How did this happen? That is a real question. Luckily, an amateur YouTube videographer cracked the case. He posted a video of tents in a parking lot, surrounded by chain link. This, he informed us in serious tones, was where the city of Portland was housing the Antifa insurgents responsible for the riots: “This is a war encampment.”

It is not. It is in fact a joint project of social service agencies providing basic shelter and sanitation for homeless people during the pandemic. Several such “outdoor shelters” had been announced in advance and were well reported in the media when they opened, weeks before the unrest even began.

I was amused by this conspiracy theory, but also perplexed. Does the person who shot that video really think he unearthed an Antifa war camp? Or are these sorts of stories just expressions of political commitment, like MAGA hats and over-sized flags?

All of this led me to reconsider Richard Hofstadter’s seminal essay “The Paranoid Style in American Politics.”[1] More precisely, it made me notice the third word in the title. “Paranoid” of course gets all the glory, and Hofstadter spends much of the essay explaining exactly what he does and does not mean by paranoia. But “style” does most of the work. For paranoia, in the political sense, is an aesthetic practice. It is more about presentation and display than discovery and belief. Even the use of facts, in conspiratorial thinking, serves as a kind of legitimating ornamentation, like a secret handshake. A swarm of detail signals simply that one is in the know; but the cited facts do not build toward a logical conclusion, except incidentally. The proof of this is that they can be invented or suppressed at will. (Hofstadter considers the use the paranoiac makes of facts on pp. 36-38.)

Hofstadter does not quite say that paranoia is an aesthetic category, but there are places where he comes close. He begins his second paragraph by explaining,

“When I speak of the paranoid style, I use the term much as a historian of art might speak of the baroque or the mannerist style. It is, above all, a way of seeing the world and of expressing oneself” (p. 4).

He goes on to say that “Style has to do with the way in which ideas are believed and advocated rather than with the truth or falsity of their content” (p. 5).

The precise character of the style—which Hofstadter describes as “overheated, oversuspicious, overaggressive, grandiose, and apocalyptic in expression” (p. 4) —is of course related to the paranoia, but it makes little difference what one is paranoid about. One may feel personally persecuted, in private life or in one’s career; one may fear the tyranny of a government kept in power by unscrupulous means; or one may fear a campaign of subversion that threatens the government’s stability. The object of the paranoia is in a sense secondary to the paranoia itself. This is why all conspiracy theories, regardless of the suspected conspirators or their presumed aims, exhibit a kind of family resemblance.

The paranoia suggests its own style; and the paranoid style implies an entire worldview. Hofstadter writes: “The distinguishing thing about the paranoid style is not that its exponents see conspiracies or plots here and there in history, but that they regard a ‘vast’ or ‘gigantic’ conspiracy as the motive force in historical events” (p. 29). The ideal conspiracy theory should be both over-complicated and over-simple, all-encompassing and yet utterly reductive. It posits a world that is highly ordered, in which nothing is a coincidence or an accident, in which everything occurs for a reason and even according to a plan. It should thus be presented with a tone of absolute certainty; it should treat as obvious conclusions which, nevertheless by the very premises of the argument, are assumed to be occult. The conspiracy is total; the theory must be totalizing. The conspiracy is everywhere, all-powerful; the theory must also be all-consuming, and also hermetically sealed. It must account for every occurrence, pull in every detail; facts that cannot be incorporated into the script can be disregarded as false. The logic is circular, but the circularity is part of the aesthetic.

It is possible I think, for people to adopt the paranoid style before, or even without, adopting the paranoid beliefs. That may take the form of utter cynicism, peddling stories that one knows to be nonsense in order to grasp at some perceived political advantage; or it may take the form of an unthinking mimicry, spouting the approved phrases without considering what they mean or whether they mean anything at all. Once one fully adapts oneself to the paranoid style and acquires the corresponding instincts, the distance between these two versions may narrow to the point of vanishing. Absolute indifference to reality tends, over time, to degrade the facility for discerning it.

If this is correct—if it is even close to correct—it may help us take one small step toward understanding such otherwise baffling phenomena as the mainstreaming of QAnon, Trump’s preternaturally stable approval rating, and the widespread resistance to coronavirus precautions. It may also help explain why such phenomena seem so completely immune to masses of evidence or the force of argument. Irrational views can be overcome by rational argument, but arational views cannot be. It may be less that people support Trump because of their erroneous beliefs, than that they espouse absurdities because they support the president. Symbolic expressions of cultish loyalty cannot be contradicted by the rules of logic or of the laws of evidence, any more than a symphony can be contradicted by a quadratic equation.

Myths must be fought in some respect on their own terms. I do not mean—let me be clear—that we should adopt the paranoid style ourselves, battling their lies with lies of our own, accommodating ourselves to nonsense as a kind of test for political loyalty. In fact, we must guard against any temptation in that direction.

What I mean, instead, is that we have to start by recognizing that it is not enough to prevail in the realm of evidence and reason, just as it is not enough to fight in the streets. To defeat a movement with any sizeable following, we must learn to understand its peculiar attractions. We have to recognize that it fills some real need in the lives of its adherents. And that is the terrain on which we must learn to struggle. We must fight not only at the level of fact, but at the level of meaning. Facing an adversary with a paranoid style, it will never be enough to show that they are wrong; that is almost an irrelevancy. We need to work instead to make the paranoid style, and the politics accompanying it, less attractive than the alternative—and we must provide an alternative that fills equivalent needs. To accomplish this, we have to learn to invoke stronger, competing loyalties and to generate more powerful, more admirable aspirations. We need to offer compelling narratives by which people can make sense of their lives, stories that give them meaning.

An ideal—even a stupid, wicked, perverse ideal—can only be overcome by a greater ideal.

Bio
Kristian Williams is the author of Our Enemies in Blue: Police and Power in America, Between the Bullet and the Lie: Essays on Orwell, and Resist Everything Except Temptation: The Anarchist Philosophy of Oscar Wilde (all from AK Press). He is presently writing a history of policing in Portland.