You are here: Home › post › Strategies to defend abortion access: a review article by Matthew N. Lyons [ThreeWayFight]
[This article was originally posted on Three Way Fight: An Insurgent Blog on the Struggle Against the State and Fascism on July 19, 2022.]

How do we assert reproductive autonomy when far rightists are on the offensive and liberals have failed to stop them?

As we noted two months ago, the U.S. Supreme Court’s decision repealing Roe v. Wade marks a historic victory for the Christian right and specifically its fascist, theocratic wing. Defending access to abortion is an antifascist struggle, but that doesn’t mean the focus should be only, or even primarily, on combating the far right. What’s needed is a struggle on two fronts: against the various forces of the authoritarian right but also against their centrist enablers—the politicians and institutions that have long claimed to be defending abortion access while weakening opposition to the far right and giving ground to it step by step by step. These are different kinds of struggle and they call for different approaches. 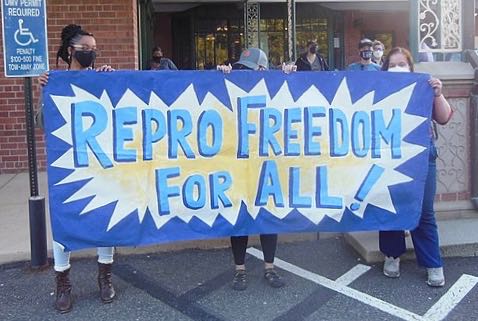 In the wake of Roe’s repeal, I’ve seen several excellent essays that use this kind of two-front framework to guide liberatory strategy. I’d like to focus here on three of these essays, to highlight what they share and also how their different perspectives broaden and enrich an ongoing discussion that’s vitally needed.

Reading these essays, I see three overarching themes—three key things that each of them calls on us to do: highlight interconnections between different groups or rights under attack, confront liberal NGOs and the Democratic Party, and develop a clear and militant strategy. Let’s look at each of these themes in turn.

Both Elise Hendrick and Noah Zazanis frame access to abortion as a key form of bodily autonomy, and both specifically emphasize connections between criminalizing abortion and criminalizing trans people as two prongs of a larger right-wing strategy. Zazanis writes, “The surface logic of parental consent laws [for getting an abortion] is similar to the logic barring childhood transition: abortion is a serious, irreversible medical procedure for which youth under 18 are too young to give informed consent.” Hendrick denounces a recent New York Times column that tries to stake out a position that’s pro-abortion rights yet trans-exclusionary as a blatant example of divide-and-rule tactics.

“Our fights for healthcare, and against criminalization, are inseparable from the labor rights of healthcare workers, and of the nonprofit workers doing unpaid overtime in the wake of the Dobbs ruling. More than ever, we must build strong, independent unions willing to defend workers who refuse to enforce these bans… It is no coincidence that the workers on the frontline of criminalization are in fields dominated by women, fields where queer workers are overrepresented and underpaid.”

Hendrick and CrimethInc. both highlight a further connection: between the fight for abortion access and the fight against police violence and repression. CrimethInc. urges abortion rights advocates to learn from the George Floyd uprising and writes, “Yes, there are fundamental differences between the movement for reproductive freedom and the movement for Black lives—but those who will be most impacted by the criminalization of abortion overlap considerably with those who are most impacted by racist policing.” Hendrick calls out implications for movement security, noting that criminalization of abortion means “the full weight of the surveillance state is coming down on millions of people who have previously been largely exempt from it…. That means making clear the importance of not talking to the police, not coordinating with police, protecting our identities, and…not posting unedited video of people doing illegal things on social media.”

In summary, drawing the connections between anti-oppression struggles helps us to understand the right’s larger agenda, build and strengthen coalitions, make our movements smarter, and honor the multiple and complex ways that people are affected by institutional violence.

Confront NGOs and the Democrats

All three of our featured essays sharply criticize the Democratic Party’s role as supposed defender of abortion access. Zazanis notes that “For decades, Democratic leadership has treated abortion as a cudgel for electoral gains” (and more recently has done the same with so-called “LGBT issues”). Hendrick adds that this approach has repeatedly meant whitewashing the shameful anti-abortion positions of some Democratic candidates, such as Hillary Clinton’s 2016 running mate Tim Kaine. CrimethInc. describes the effect of such opportunism as “the workings of the political ratchet, in which Republicans continuously push state institutions towards more oppressive agendas while Democrats continuously give ground, keeping those who are suffering invested in the state itself in hopes that it might one day be reformed.” As I’ve argued elsewhere, this dynamic doesn’t result from Democratic leaders’ subjective “weakness”—it reflects the party’s structural role as a vehicle to divert liberatory initiatives into support for an oppressive, capitalist order.

Zazanis and Hendrick are similarly critical of liberal NGOs for being structurally and financially tied to a “respectability politics” that weakens—or simply betrays—liberatory struggle. Hendrick warns that “Liberal non-profits will try to narrow the focus of this movement, to divide bodily autonomy into specific niches… and channel our energy and our anger into avenues that don’t make the ruling class nervous. They will resist any attempt to defy these laws and the cops who enforce them outright, and they will try to prevent any kind of solidarity and cross-pollination” between political struggles. Zazanis gets more specific, calling out Reproaction for trying to police the boundaries of acceptable “direct action” and Planned Parenthood, the Guttmacher Institute, and the National Center for Transgender Equality for union-busting and abusive management practices. Even smaller, more independent NGOs engaged in vitally important support for self-managed medication abortion have “effectively ignored the question of who runs the clinics and how they operate, or how to defy those who seek to close them.”

Hendrick sums up part of the lesson with regard to both NGOs and the Democratic Party: “Only by maintaining our independence from these institutions can we exert the sort of pressure that is necessary in order to force them to do the right thing.”

“If we want the ruling class to even consider restoring our right to bodily autonomy, we need to put the hurt on them. We need an or else.

“Historically, the movements that have extracted meaningful concessions from unwilling ruling classes have been those that attack the two major pressure points of capitalist society: profitability, which is the point of the entire system, and governability, which calls the system’s very existence into question.”

As reference points, she cites two recent large-scale militant initiatives: in Poland in 2016, mass protests and a strike (an attack on profitability) that forced the government to walk back a proposed total abortion ban, and in the U.S. in 2020, widespread militant attacks on both police stations and big box retail stores (governability and profitability) following the police murder of George Floyd. Hendrick argues that calls to abolish the police have not succeeded because they threaten capitalist society on a deep level, but that U.S. capitalists are not committed to banning abortion and would restore abortion access “if we make it clear that they can’t afford not to.”

CrimethInc., too, argues for a militant approach, but they are particularly concerned with how militancy is targeted:

“if your goal is to exert leverage, you have to identify a group you can actually exert leverage on—a group that is likely to change course as a consequence of your intervention…. You have to make sure that the target of your efforts has a choice—then make them an offer they can’t refuse.”

They cite two counter-examples. On one hand, many abortion rights proponents have joined public rallies that help to boost participants’ morale but have no specific target. On the other, a number of anonymous groups, operating under the name Jane’s Revenge, have vandalized anti-abortion “crisis pregnancy centers.” The latter actions “may inspire people to take action on their own, but do not offer a participatory space in which to build collective momentum.” In addition, although the vandalism actions have a specific focus, “in targeting anti-abortion centers, they are taking on the most intransigent opponents of abortion…” CrimethInc. continues, “If it is possible to exert leverage on anyone who is complicit in criminalizing abortion, it is probably not far-right religious cult members, but their centrist accomplices”—in other words, liberal and moderate politicians who could be persuaded to defend abortion access if the cost of not doing so is high enough.

Here, too, the movement against racist police violence offers a useful reference point:

“At the high point of the George Floyd uprising, when millions of people had ceased to accept the legitimacy of the police and were acting accordingly, we saw terrified liberals like the mayor of Minneapolis suddenly take the demands of the movement very seriously, promising to take steps towards police abolition… Later, when the politicians had reestablished control, they betrayed those promises—showing that our effectiveness hinges on keeping our social movements lively and strong, not on winning concessions.”

Exerting leverage in this way is very different from allying with liberals against the far right, or with, say, the federal government against state governments. As CrimethInc. puts it, “compelling one [state] institution to limit the power of another can be strategic, provided it does not contribute to legitimizing any of the institutions involved. It must be clear to everyone that the power that drives social change derives from grassroots organizing, not from state institutions…”

How do we go about asserting reproductive autonomy in the face of a major defeat, when far rightists are on the offensive and the forces of liberal respectability have failed to stop them? The three essays I’ve examined here grapple with this question in related ways. That doesn’t mean that their authors necessarily agree on every point, but it’s striking to me how much their arguments complement each other, and I do think the whole is greater than the sum of the parts. At the least, there’s a lot here that can inform and inspire further discussion and strategizing.

I started this discussion by invoking three way fight politics as a framework for strategy. None of the three essays uses that terminology, but at least two of them make points closely related to it. CrimethInc. notes that the far right are not defenders of the established order but rather advocates of social change (increased repression and oppression) and have used sustained pressure campaigns and a range of tactics, including bombings and murder, to bring it about. Hendrick emphasizes that those who advocate banning abortion are “a minority of bigots who are useful to capital, but far from essential to it,” and it is precisely this gap that opens strategic space for advocates of liberatory politics. These three essays insist that we have choices beyond surrendering to fascism on one hand and subordinating radical possibility to liberal holding actions on the other.