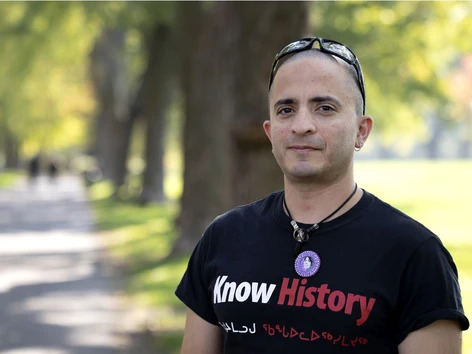 When Dr. Samir Shaheen-Hussain testified before the inquiry into Joyce Echaquan’s death, he aimed to bring some historical and political context to what had transpired.

Like people across the province and country, he told the coroner, he was appalled by the way hospital staff treated Echaquan . But sadly, he was not surprised.

“Systemic racism in health care is not new in Quebec. In fact, Indigenous communities have been calling this out for years,” Shaheen-Hussain, a physician and social activist, said in a recent interview.

“There’s a distrust there,” he added. “And (the Quebec government) ignoring the reality that a lot of these communities feel, on a day-to-day basis, is not going to help build that trust.”

A pediatric emergency physician at Montreal’s Children’s Hospital, Shaheen-Hussain has been fighting against discrimination in Quebec’s health care network for years.

In 2018, he was part of a group of health-care providers who successfully lobbied the provincial government to end its decades-old practice of barring parents from medevac flights, a policy that disproportionally affected Indigenous people .

Last year, he published a book exploring that fight, titled Fighting for a Hand to Hold: Confronting Medical Colonialism against Indigenous Children in Canada.

In it, Shaheen-Hussain looks at anti-Indigenous systemic racism in Canadian health care, including in Quebec, and argues that in order to understand why it persists today, a knowledge of history is important. The book was published only a few days before Echaquan’s death would thrust the issue back into the spotlight in Quebec.

Echaquan, a 37-year-old Atikamekw mother of seven, died at a Joliette hospital last fall after live-streaming staff members insulting and mocking her.

While presenting her final report last week, which cites Shaheen-Hussain’s testimony, coroner Géhane Kamel said she believes had Echaquan been white, she would still be alive today. Kamel ruled Echaquan’s death to have been preventable, finding the “racism and prejudice” she faced while hospitalized contributed to it.

And to ensure a similar death doesn’t occur, Kamel recommended the provincial government recognize that systemic racism exists in its institutions and commit to eliminating it.

But in the year since Echaquan’s death, Premier François Legault has repeatedly refused to do so . Addressing Kamel’s findings last week, he reiterated that while he believes there is racism and discrimination in the network, and it must be fought, he does not see it as a systemic problem.

For Shaheen-Hussain, the premier’s argument misses the point. When he discusses systemic racism today, Shaheen-Hussain likes to employ a phrase used by Justice Murray Sinclair, who presided over the Truth and Reconciliation Commission .

“He said systemic racism is the racism that’s left over even after you get rid of all the racists,” Shaheen-Hussain said. “So even if someone was magically able to remove racist prejudices and stereotypes from our minds, the practices and policies and laws that are in place structurally have an impact.”

To show how long-standing the issue has been in Quebec, Shaheen-Hussain points to how, between the 1940s and 1960s, Inuit in Nunavik were forcibly transferred to southern hospitals when suspected of having tuberculosis.

And to how, in following decades, it has been well documented that Indigenous children who were admitted into Quebec hospitals frequently “disappeared” into the system, leaving their families in the dark.

Years later, Shaheen-Hussain said, that trauma lives on through different generations, fuelling the deep-seated distrust many still feel today. But you also don’t need to look that far back to find examples, he added.

During the Viens commission, a three-year inquiry into how Indigenous people are treated by public services in Quebec , there was repeated testimony about Atikamekw people feeling discriminated against at the same Joliette hospital where Echaquan died.

In what Shaheen-Hussain called a “chilling” example, exactly two years to the day before Echaquan’s death, a prosecutor in the commission had questioned the health board in charge of the hospital about the complaints.

The concerns raised included staff missing proper diagnoses because of prejudiced assumptions about drug and alcohol use by Indigenous people, and Indigenous patients saying doctors weren’t taking their pain seriously during visits — issues later raised in connection with Echaquan’s death.

Though he’s been disappointed by the Quebec government’s position on systemic racism, Shaheen-Hussain remains hopeful change can come.

In the aftermath of Echaquan’s death, an open letter blaming systemic racism for her death was signed by more than 450 health-care providers. And in the year since, several professional orders, unions and faculties of medicine have endorsed what’s known as Joyce’s Principle .

Rejected by the provincial government because of its use of the term “systemic,” the principle calls for a commitment to respecting Indigenous Peoples’ rights in the health care system.

“The government is lagging behind what needs to be done, but those of us who are on the front lines, providing health-care, know this has to change,” Shaheen-Hussain said.

“And this is where the change is going to come from.”