You are here: Home › post › The Far Right, Global Capitalism, the Left, and Antifascism: Three Interviews with Matthew N. Lyons 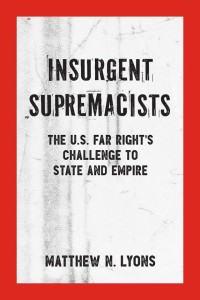 The following interviews with Matthew N. Lyons, author of Insurgent Supremacists: The U.S. Far Right’s Challenge to State and Empire, provide important background to the realignment and convergence going on today, as well as for grasping the importance of persistent divisions and distinctions within both the ruling class and the far right.

The far-right movement isn’t monolithic—it’s a complex spectrum of organizations and ideologies. To help us break it down, today Allen is joined by Matthew N. Lyons, co-author of the landmark book Right-Wing Populism in America, to discuss the evolution of rightist trends and the rise of fascism in the U.S.

With the help of listener callers, they discuss white nationalism, the far right’s relationship to the Constitution, the politics that paved the way for Trump, the meaning of fascism, and the interplay between right-wing movements and systems of oppression.

Tthe right wing is not a monolithic force. One of the key points Matthew N. Lyons details in his book Insurgent Supremacists: The U.S. Far Right’s Challenge to State and Empire is that the right wing is composed of groups with different historical roots. Trump, Lyons argues in this interview, is a right-wing populist.

Insurgent Supremacist: An Interview With Matthew N. Lyons On Antifascism, Anti-Imperialism, And The Future Of Organizing, Antifascist News Oct. 22, 2018

Looking at the strains of fascism that appropriate anti-imperialist and other struggles often associated with the left, how the far-right is changing and creating new social movements, and how we can understand fascism’s future. This interview with Matthew N. Lyons looks at how to understand populism and fascism, how fascists use anti-imperialist and anti-capitalist politics, and what we can do about it.

INSURGENT SUPREMACISTS IS CURRENTLY ON SPECIAL AT LEFTWINGBOOKS.NET