You are here: Home › post › THE GUERRILLA AND PROLETARIAN POWER (Red Brigades, February 1978) 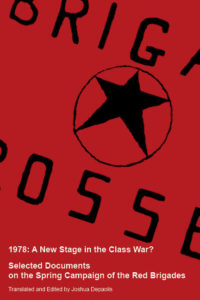 What does it mean to build the organization of proletarian power in the current period of the class war?

First of all, we must understand that we are not faced with a plan to temporarily limit bourgeois democratic liberties, that is to say, the closure of some “legal space” in the state of law; it would be more accurate to say that we face the rampage of counter-­revolutionary imperialist reaction. So it is not a matter of complaining about repression, but of going further, developing the revolutionary class war.
When the infamous special laws are implemented to eliminate the communist vanguard, to close the offices of autonomy, to intern its militants, to put the urban centers under a state of siege, to prevent the anti-­imperialist struggle on the streets, it is real political suicide—physical as well—to insist on legalist positions which, if they are not opportunistic retreats, are reduced to pure wishful adventurism.

One must understand that in the new period, the only way to develop proletarian antagonism and initiative is with gun in hand, and the new tasks of the communist vanguard relate to the organization of the armed struggle for communism.

To organize proletarian power today is to identify the strategic lines along which the revolutionary confrontation advances, and to articulate everything on the basis of this, the armed attack against the fundamental political, economic, and military centers of the imperialist state.

To organize proletarian power today means to strategically organize the armed struggle for communism, to learn to live, move, and fight in the new situation. We must not panic in the face of the ferocity of the enemy and overestimate the force and impact of his instruments of annihilation. We can and must live clandestinely among the people, because this is a condition for the existence and development of the revolutionary class war in the imperialist state.

It is in this sense that we talk about the “strategic content of clandestinity,” the “indispensable means of revolutionary struggle in this period,” while at the same time warning against any other interpretations whether defensive or mystical. A multitude of false conceptions and prejudices have spread around clandestinity. There are those who believe the enemy propaganda which endlessly repeats that the guerrillas are holed up in the darkest “dens,” that communist guerrillas are mysterious individuals like devilish Martians, perpetually hunted and constantly on the run, basically inaccessible to the “common people.”

According to such people, the undeniable efficacy of the guerrilla is the result of a “mythic” clandestinity, which would make the militants a species of superhuman. Others have set out an absurd equation: “legality” equals the movement and as a logical corollary “clandestinity” equals “estrangement from the movement.” These people think of clandestinity as at most a way for individual comrades to stay safe, or as a means of parrying the enemy’s repressive attacks. We have mentioned these two extreme positions, because they cover everything within the entire spectrum of the “mythical” or “defensive” and profoundly erroneous concepts of clandestinity. They only superficially grasp the characteristics of the protracted revolutionary class war.

The class war is not the war of a chosen few; it must bring ever wider layers of the proletariat to mobilize and fight against the imperialist monster. In this way, proletarian power develops along lines “internal” to the movement and organizations which are intermixed and permeated with the armed communist vanguard.

However, when waging protracted war in the imperialist metropole, the site of maximum concentration of imperialism’s brutal force, where the revolutionary forces have to operate under conditions of “strategic encirclement,” it is only possible to constantly maintain the offensive and consistently consolidate the organization of proletarian power on the basis of the strictest clandestinity.

In the factories, in the neighborhoods, in the schools, in the prisons, and wherever imperialist oppression manifests itself, to organize proletarian power means: bringing the attack to the specific expressions of the imperialist state while simultaneously building the unity of the metropolitan proletariat in the Proletarian Movement of Offensive Resistance, and the unity of the communists in the Fighting Communist Party!