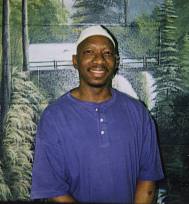 My father, Robert Seth Hayes, former Black Panther Party member, has been a resident of the New York state prison system for the past 29 years, making him one of the longest held Panthers in the United States. He was arrested in September 1973 – I was only three years old at the time – sentenced in 1974, and continuously denied parole since July 1998.

His latest parole board hearing was July 2002, and again he was denied release for the third time. All this despite the fact that he has an exemplary prison record with several accomplishments, not the least of which is the successful completion of several college level courses, along with peer counselor training and mentorship programs that have enhanced his ability to serve the prison population the best way he knows how – as an advocate, teacher and leader, gaining him enormous respect from his peers.

The parole board, in an effort to continue to punish him for his political activities, overlooks all of this, including the fact that upon my father’s release many people are prepared to support him in his transition back into the community in whatever capacity necessary.

Now in his fifth decade of life, my father is managing both diabetes and hepatitis C. Under the best of circumstances these two diseases are difficult to control, and prison complicates our efforts tenfold. It took a near death experience before he was properly diagnosed a diabetic and an organized effort on the part of his family and friends to galvanize together politically to secure him medical treatment for the hepatitis. Needless to say, it was a nightmare! Fortunately, we have been successful in getting him treatment and his body has responded well to the medications, no doubt because of his powerfully positive spirit and healthy lifestyle over the years, eating right and exercising. My father is a wonderful example that “you can jail the body but not the spirit.”

In fact, his spirit is as bright today as it was so long ago. I remember experiencing his strength whenever I was in his presence as a little girl visiting him in various prison facilities and feeling overwhelmed by it all. Not overwhelmed because he smothered me with it, but overwhelmed because I could not take it with me when I left him after every visit.

Today I continue to be overwhelmed by him, because I continue to long for my Daddy to come home. Nevertheless, I was nurtured and raised during those visits, learning some of my most powerful lessons in life, and those lessons have propelled me into a life of activism, teaching me to use my life to speak for those less fortunate in my community.

My father has taught me that there is honor in a life in prison if your crime is fighting for the oppressed. Most of my mentors have been either to jail or prison at least once in their lives – Nelson Mandela, Martin Luther King Jr., Fannie Lou Hamer, just to name a few.

Are there things that he might do differently today? I am sure there are, but the basic principle of fighting for the oppressed is something that will never change. We are an activist family. He taught me that love for myself means love for humanity, and now we both teach those same values to my 10-year old daughter, his granddaughter, and like me she is an astute student of social justice.

I will not lie. Sometimes it is real hard to wrap my brain around the fact that we are raising my daughter, another generation, with him still incarcerated. It becomes a terribly hard thing for me to think about, making me sick with grief and depressed.

However, in those difficult times I remind myself what true freedom means, and for me it means to think freely and imaginatively, ultimately shaping and sharpening the mind to think and act with consciousness for those oppressed and lost. Freedom also means taking care of others in a world and culture sick with individuality, exploitation and corruption.

Some of you might find this concept of freedom hard to comprehend, because too many of you believe that freedom means going to the plantation every day where your labor is exploited, only to return home to communities with liquor stores instead of libraries, welfare offices instead of parks, and candy stores instead of whole food markets. Others maintain that freedom means having an Ivy League M.D. or Ph.D. behind their names and a downtown office address.

They flaunt their Yale and Harvard lambskins as proof positive of their freedom, when in fact too many of them trade in their black pride or become as race neutral as possible for acceptance in the ivory tower, only to discover later that no one respects a traitor, not even the devil himself – ask black conservative-intellectual-turned-liberal Glen Loury. After some personal tragedies where race mattered, Loury was forced to repent for years of lambasting every social program since the Emancipation Proclamation. He had to readjust his intellectual lens, changing the focus (a bit) from blaming the victim, or black Americans, for racial inequality to blaming the real perpetrator – a history of racism in America that continues to kill and oppress black lives everyday.

Do not misunderstand me, I realize that we are all out here struggling to survive the best we know how and more often than not we do so under some of the most extreme of circumstances. However, what is important to keep in mind is that none of us is truly free from exploitation unless we are diligent agitators advocating for the freedom of all oppressed people! You are no more likely to be free working for the city while your brother hustles the streets to feed his family than if you make it to Harvard or Yale, because collectively we still scrape the bottom of the barrel socio-politically and economically.

Our community capital is what we need to work on, and that is what the Panthers tried to emphasize and teach us – and what my father continues to teach today.

When I define freedom this way, I realize that my father has more freedom than he knows what to do with. It reminds me that he has lived a life in prison liberated from the oppression that kills most black Americans today. It keeps him healthy in mind, body, and spirit. He has empowered me with that same spirit of liberation. In this way he has enjoyed and continues to enjoy more freedom behind prison walls than most people will ever enjoy outside of prison.

They call him Black Revolutionary Political Prisoner, but I simply call him Daddy.