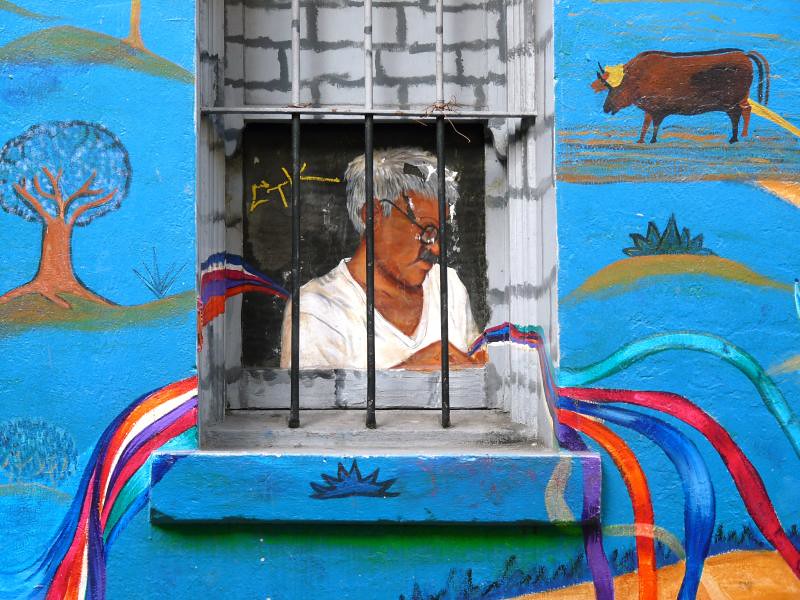 Perhaps as you stroll along Columbus Avenue in North Beach, you pay little attention to the sixty-foot-long Jack Kerouac Alley, aptly situated between the landmark City Lights Bookstore and legendary Vesuvio Café. The passageway that served as a transportation shortcut from Chinatown to North Beach was once a refuge for back-alley drinkers and rotting garbage. Today, Jack Kerouac Alley is transformed into an inviting pedestrian-only thoroughfare complete with decorative lampposts and poetry from eastern and western cultures inscribed on the brick walkway connecting the two neighborhoods. The renovated alley was opened to the public on March 31, 2007, under the funding and direction of the Chinatown Alleyway Improvement Project.

Pre and post alley renovation, since October 1999 the mural Vida y sueños de la cañada Perla (Life and Dreams of the Perla River Valley) has adorned the wall of the City Lights Bookstore that faces Jack Kerouac Alley. This mural is a reproduction of Mexico City artist Sergio Valdéz Rubalcaba’s original work that was painted in the jungle village of Taniperla, home to the Tzeltal Mayan indigenous people in Chiapas, Mexico.

Depicted in the painting are revolutionary leaders Emiliano Zapata and Ricardo Flores Magon and ski-masked rebels observing routine daily life activities in the community. The mural represents local autonomy of this indigenous group and was painted on the wall of the new municipal headquarters for the Zapatista National Liberation Army (EZLN) in the village of Taniperla. EZLN fought for indigenous land rights, education, and social welfare in the late 1990s.

At dawn on April 11, 1998, one thousand Mexican Army troops stormed the village of Taniperla and occupied the territory. Cornfields, coffee plantations, and houses were burned; local leaders were arrested. Artist Sergio Valdéz Rubalcaba was among those arrested and beaten. The mural was destroyed by the Mexican Army. Charged with rebellion, Rubalcaba was sentenced to nine years in prison for designing the mural. Due to international protests and pressure from human rights groups, he was released from prison after a year and a half and did not complete his full sentence.

In solidarity with the indigenous people’s fight for justice and dignity, global human rights workers who witnessed the demolition of the original mural and invasion of Taniperla canvassed locations throughout the world to paint reproductions of Vida y sueños de la cañada Perla. In addition to the location on the outside wall of City Lights Bookstore, other reproductions may be found in Oakland; Barcelona, Madrid, and Bilbao, Spain; Florence, Italy; and Mexico City.